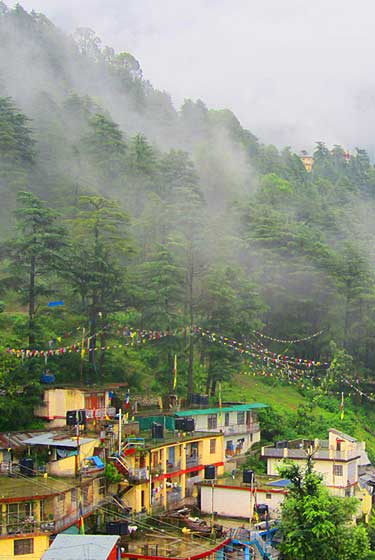 Around Dharamkot and Bahl Village 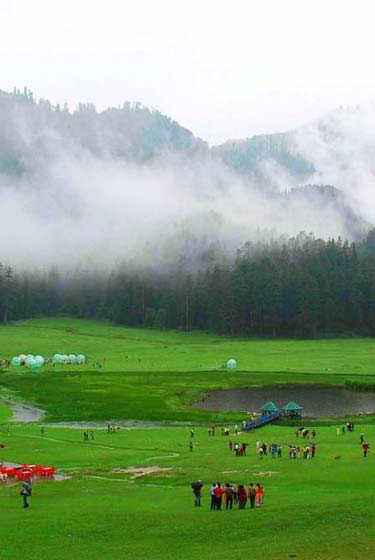 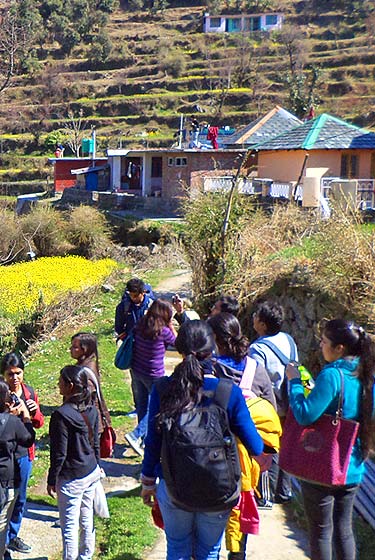 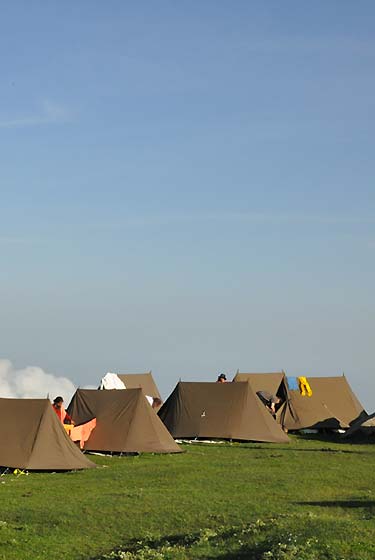 GONDLA (3160 m): It is 18 kms. from Keylong on the right bank of Chandra river. The location of royal houses of the village is interesting. In the month of July a fair is held when Lamas dance & enjoy. The Gompa of this village has historical significance and the fair attracts a large number of visitors. The residence of the Thakur of Gondla is an eight storey building of its own kind in the entire Lahaul valley. It is worth a visit. This is called Gondla castle or fort and was built in 1700 A.D.

TANDI: Tandi is 8 kms. short of Keylong and is situated at the confluence of Chandra & Bhaga rivers. A legend says that there were two lovers, Chandra being the daughter of the Moon and Bhaga the son of the Sun god. To perform there eternal marriage, they decided to climb to the Baralacha La & from there they ran in opposite directions. Chandra being active and smart easily found her way &reached Tandi after covering the distance of 115 kms. Soon Bhaga was found coming with great struggle through the narrow gorges to Tandi where consequently both met and the celestial marriage was performed. Bhaga covered about 60 kms. distance which was very difficult.

GURU GHANTAL Guru Ghantal Monastery, Lahaul TourismMONASTERY(3020 m): This is on the right bank of Chandra river about 4kms. above Tandi and is believed to be the oldest Gompa of Lahaul having wooden structure with pyramidal roofs, wood carving and preserving the idols of Padmasambhava & Brajeshwari Devi. On the full moon night in mid-June a festival called "GHANTAL" is celebrated by Lamas & Thakurs together.

KEYLONG (3340 m): Keylong is the district Headquarters of Lahaul Spiti on the main road to Leh over Rohtang. It is an oasis of green fields and willow trees, water streams surrounded with brown hills and snow capped peaks. There are hotels, tourist bungalows and rest houses to stay.

KARDANG MONASTERY (3500 m): It is about 5kms. from Keylong across Bhaga river. It is believed to be built in 12th century. The Monastery has a large library of Kangyur and Tangyur volumes of Budhist scriptures in Bhoti. Kardang village was once the capital of Lahaul.

SHASHUR MONASTERY: Situated on a hill about 3 kms. far from Keylong towards north on the same slope. During June/July this monastery attracts lot of visitors when Lamas perform devil dance. It was founded in the 17th century a.d. It belongs to red hat sect and is located among the blue pines. The paintings are represent the history of 84 Buddha's.

TAYUL GOMPA (3900 m): Tayul Gompa is 6 kms. from Keylong and is one of the oldest monasteries of the valley having a big statue of Guru Padmasamhava about 5 m high and houses library of Kangyur having 101 volumes. In Tibetan language Ta-Yul means the chosen place. There is an interesting story behind this.

SISSU (3120 m): It is on Keylong-Koksar road over 30 kms. from Keylong. There is a big waterfall here. This is the seat of God Geypan, who is worshipped in the entire valley.

KOKSAR (3140 m): It is 21kms. beyond Rohtang pass in Lahauland is the coldest place in Lahaul. HRTC workshop, Rest House, police assistance and eating places are available during the season.

JISPA: It is 20kms from Keylong on the bank of Bhaga river having a rest house and mountaineer hut. There is a big camping ground. Sufficient trout fish is available in the river.

GEMUR: It is 18 kms. from Keylong in Bhaga valley where devil dance is held during July in the Local Gompa. The place is situated on Manali-Leh highway.

DARCHA (3360 m): It is 24 kms. from Keylong on Leh road where a camping ground is available. From Darcha trekkers start their trek to Padem, via Shingola as well as Baralacha/Phirtsela. There is a police check-post for assistance. Beyond this point there are hardly any trees. Yotche and Zanskar Nallahs meet Bhaga river here from different directions.

BARALACHA LA (4883 m): It is about 73 kms. from Keylong on Manali Leh road. The name means pass with cross roads on summit (roads from Ladakh, Spiti and Lahaul join at the top). There is no road yet from Spiti. Only a path exists. This is also the point of origin of Chandra, Bhaga and, Yunam rivers. They flow to three different directions through the Chandra, Bhaga and Lingti valleys.

SARCHU: It is the last border point between Himachal and Ladakh, where HPTDC put up a tented colony for the convenience of the touristsduring summer season. It is situated at a distance of 116 kms. from Keylong.

SHANSHA: This is on the right bank of river Chandra-Bhaga (Chenab) at a distance of 27kms. from Keylong on Udaipur road. The Geypan, a powerful deity of Lahaul is believed to be born here. A shrine dedicated to the deity has also been built in this village.

TRILOKINATH TEMPLE: Trilokinath means the Shiva. A Temple is situated in the village which is about 4 kms. short of Udaipur on the left bank of Chenab river. Devotees from far off places come to pay their respects at this unique temple. This Shiva temple was given a look of Budhist shrine by Guru Padmasambhava by installing the 6 armed image of Avalokiteshvar. It is now sacred both to Hindus and Bhudhists alike and attracts many pilgrims from both these communities. In August, a big festival named Pauri is held for three days when people including the sadhus and followers of various religious sects gather to receive the blessings of Lord Trilokinath.

UDAIPUR (2743 m): In olden times this village was known as Markul and so the name of local goddess is Markula Devi. The temple here is unique and famous for its wooden carving on its roof and ceiling. Its name was changed by Raja Udai Singh of Chamba. This place is situated near the confluence of Chenab and Mayar Nallah. This place is therefore a starting point for Mayar valley and further on to Zanskar and other peaks. This is a green area rather the whole Chenab valley is greener than the Lahaul valley. It has a rest house and some hotels and is a good resting place.